Notice: Trying to get property 'display_name' of non-object in /www/wp-content/plugins/wordpress-seo/src/generators/schema/article.php on line 52 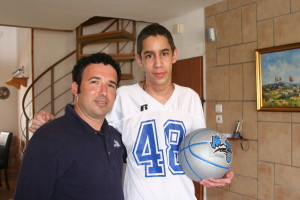 We are glad to report that on January 16th, 2013 justice was served and a guilty verdict was handed down in the case of Jack Teitel versus the State of Israel. Jack Teitel was found guilty on all 10 indictments against him including the attempted murder of Ami Ortiz! This is a great victory, and we are thanking the Lord. It’s been almost 5 years since Jack Teitel brought a bomb to our house disguised as a Purim basket which changed Ami’s and our lives forever. Since then we have dealt with lawyers, detectives, police and media on an ongoing basis. The court hearings have been ongoing for 3 years. The judges rejected the assertion of the defence lawyers who were trying to prove that Teitel was first, not mentally fit to stand trial, and when that failed, not responsible for his actions in the past because of insanity.

The reason for our joy doesn’t stem from any sense of revenge on our part, but because we believe it is the right judgement for Ami and our family, for the Messianic Body and for Israel. The sentencing will take place God willing on February 19th. The first degree murder charges carry with them a mandatory sentence of life in prison in Israel, so we believe he will receive two life sentences, but we also hope that he will receive a sentence for the crime against our son for Ami’s sake, I think it will further help him to put it all behind him and give him further closure.

I believe the people of this nation are happy when a just decision is handed down by the courts, in this case, it gives a feeling of security and well being knowing that a dangerous and violent man will be off the streets. For the Messianic Body, we hope and pray that this decision will be a deterrent to others and those who were involved with Teitel, who are of the same spirit, and will help to prevent acts of violence and terror against Believers in Yeshua in Israel. And for Ami and our family, we are first of all relieved and thankful that the right decision was made, and that justice was served. We are relieved that Teitel will not be able to be used as an instrument of destruction in any one else’s life. There was nothing right about the attempt to prove that Teitel was not responsible for his acts, as he planned everything from beginning to end, coldly calculating every step and action.

However, for three years the hearings revolved only around Teitel’s mental state, and when all those attempts were exhausted, a guilty plea was given, preventing a trial and the witnesses who could have testified and revealed who he worked for, and who helped him plan, prepare for and carry out his crimes. There has been so much in this case that has been hidden in darkness and obscured. Only the Lord can now uncover what needs to be brought into the light. The Bible says, “Therefore whatever you have spoken in the dark will be heard in the light, and what you have spoken in the ear in inner rooms will be proclaimed on the housetops.” (Luke 12:3) You can read about the case and Teitel’s profile on the Wikipedia – http://en.wikipedia.org/wiki/Jack_Teitel The Wikipedia says he was a lone wolf, according to the police, but this is very much disputed.

Throughout this process, we were given many opportunities to share our hearts with the nation and even internationally through the media. Excellent articles and reports can be found on our website www.amiortiz.com -you can find links on the home page and on the Media and Press pages. They include a fantastic CBN report by Chris Mitchell and Julie Stahl, a Hebrew interview which aired on Jan. 17th, and good articles from various newspapers both local and international, including an excellent article from the Israeli paper Israel HaYom, one of the most widely read papers in Israel. The Hebrew interview on the Israeli Channel 10 reminds Israel once again that there are Messianic Jews who profess Yeshua in the land.

David sharing- With many people trying to defend Teitel and come to his rescue, and with the political element surrounding it, a couple of months ago my lawyer asked me, what would you do if despite our best efforts they would put him in a mental institution where he will be for maybe 5 years, and then he would be deemed mentally fit to be released to society and get away with murder. I told him I would feel like Habakkuk, who, though he didn’t understand God and the events of the disaster taking place around him, said,

Hab. 3:17-18
17 Though the fig tree may not blossom,
Nor fruit be on the vines;
Though the labor of the olive may fail,
And the fields yield no food;
Though the flock may be cut off from the fold,
And there be no herd in the stalls-
18 Yet I will rejoice in the Lord,
I will joy in the God of my salvation.

Yeshua said, “let no man take your crown” because when we don’t forgive we let others take it from us.

Our prayer and effort is that this will not happen tosomeone else, and that the name of Yeshua will continue to be glorified among His people Israel.

Leah – When we were interviewed by the media after the verdict, they asked if we are happy this is almost over. I said yes, but for Ami it isn’t over – having had 14 operations he now stands to undergo a series of laser treatments for the scars that cover his body. This will take place in Florida this summer God willing. But unless the Lord intervenes, he will always have to live with pain in his left hand from nerve damage and ringing in his ears from eardrums that were blown out and then replaced by surgery. Thank God though that he is healthy in his mind, heart and spirit, and that he is getting on with his life, and going to college in the U.S.

Ami continues to do well in school and to adjust to his new circumstances and surroundings. During Christmas break which was for three weeks, the basketball team only had 5 or six days of vacation and then had to return to school because they had games and practices throughout the vacation time. For the few days he had off, Ami flew down to Florida to spend time with his 90 year old Grandmother and to visit the plastic surgeon who will do the laser treatments on his scars. My older brother who lives near my mother volunteered to take Ami to his appointment which was a blessing. They spent an hour and a half in the office, getting to know the doctor and her staff, being assessed, and asking many questions about the procedure. Praise the Lord, we have an appointment for the first treatment for May 10th! The procedure will take 3 or 4 hours and recovery time will be about a week. The procedure will take place in the office, and Ami will go home immediately afterwards and recover at home. They said it will be like recovering from a sun burn! He will have a second treatment in August, and then the skin will continue to improve over a year’s time! It is an amazing process, and we appreciate your prayer for this.

One of the greatest things we can do is to say thank you to man and to God and to give honor where honor is due. We want to thank each and every one of you all again for upholding us with your love and prayer throughout the years because the victory was most definitely a corporate effort. We want to thank first of all, Ami’s brothers and sister for being a great source of strength, support and love to him always, to the Messianic Body in Israel, the Messianic believers in Ariel, the Brooklyn Tabernacle for standing with us shoulder to shoulder from the first minute of the crisis, Pastor Jerry Park, his wife Jessica and their team, Mary Jean Brennan, for Chris Mitchell and Julie Stahl from CBN, Rosh Piña Project, Donna Diorio, Moran Rosenblit and Hope for Israel, the Sorko-Ram’s and Maoz, Chaim Goldberg and his team, Adv.Calev Myers and his team, our lawyer Yossi, Pastor Chuck and Liz Kopp, Tom and Kate Hess, Joel Rosenberg and the Joshua Fund, Mike Evans, Bill Murray of the Religious Freedom Coalition, Matthias Van der Weide from Holland, Voice of the Martyr’s, Jay Sekulow, Rabbi Scott Sekulow, Majed el Shafi and the One Free World International Team, Christian Friends of Israel, ICEJ, Becky Pippert and the Kentucky House of Representatives that passed a resolution honoring Ami at the close of their 2008 session , Joanne Lee and Brad Kim from Korea, Pastor Steve Kaylor from Japan, the Dagen Magazine and all our friends from Scandinavia, Moses Hansen from Denmark, Pastor Ray Bentley from California, Gittlin, Ortiz and Vita families in the U.S., Rev. Carmin Cabrera in Puerto Rico, the Shalom Christian Center and Rev. Fidel in Puerto Rico, Sat 7 Finland, Lynn and the WLC prayer chain, Israel Today German/English News, our friends and neighbors in Ariel and the Israeli media who have reported on the case with much compassion. We also want to extend special thanks to the American FBI that stepped into a stalled investigation and caused the arrest of Jack Teitel to move forward. Last but not least we thank every individual in the international Body of Messiah that have faithfully lifted us up in prayer step by step, from almost every country around the world. The list can go on and on.

Yours in the Messiah,
Leah