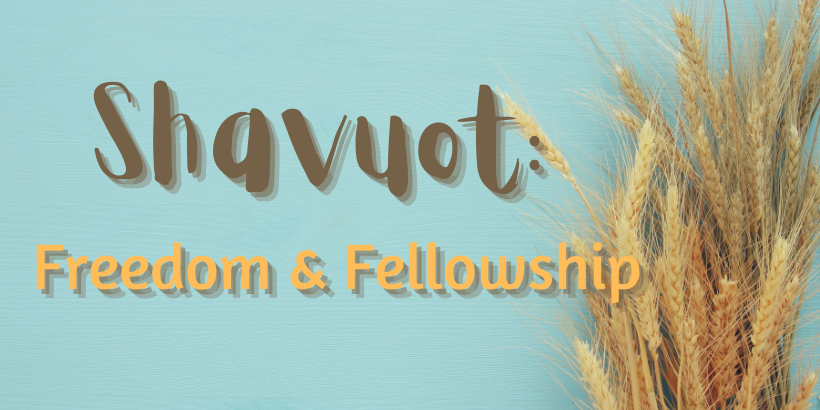 On Saturday, June 4th at sundown, we will celebrate Shavuot, also known as the “Feast of Weeks”. This holiday marks the conclusion of the seven weeks in which we count the Omer, as God instructed the children of Israel to do:

While not specifically mentioned in the Bible, Jewish tradition says that the Torah was given to Moses and the children of Israel on this day, which happened exactly 50 days after the Passover.

In the book of Acts, we read of yet another amazing event that took place during Shavuot — when God gave His Holy Spirit to dwell within us:

When the day of fulness of the seven weeks had come (Shavuot), they were all together in one place. Suddenly, there was a sound like a rushing wind came from heaven, and it filled the whole house where they were sitting. And tongues that looked like fire appeared to them, distributing themselves, and a tongue rested on each one of them. And they were all filled with the Holy Spirit and began to speak with different tongues, as the Spirit was giving them the ability to speak out.
Acts 2:1–4

It may be obvious but it is worth noting that the reason these early disciples of Yeshua were together was to observe this special appointed time of the LORD; because they were part of the people of Israel, it was understood that they would gather to celebrate this feast. At times, the significance of their Jewishness gets lost in our understanding of the early disciples’ lives.

Many scholars and theologians have written on the significance of the giving of the Holy Spirit on Shavuot (“Pentecost” in English). Yet, we would be remiss to ignore the fact that the Holy Spirit was given on the exact same day Jewish tradition says that God gave the Torah (literally, teachings or instructions) to the children of Israel. For what purpose did these two events happen on the same day?

While I am sure that there are many different and great reasons, I would like to give my own personal point of view. Many in the Body of Messiah believe that the Torah was given only for the purpose to teach us about sin. But I personally believe that it was given because of God’s amazing love for us and His desire to fellowship with us.

It all starts with God’s holiness. As we learn from Genesis 3:6–7, the first humans ate from the tree of knowledge of good and evil, despite God’s instructions not to. As a result of this sin, God and humans were separated from one another:

Then the LORD God said, “Behold, the man has become like one of Us, knowing good and evil; and now, he might reach out with his hand, and take fruit also from the tree of life, and eat, and live forever”— therefore the LORD God sent him out of the Garden of Eden, to cultivate the ground from which he was taken.  So He drove the man out; and at the east of the Garden of Eden He stationed the cherubim and the flaming sword which turned every direction to guard the way to the tree of life.
Genesis 3:22–24

Despite man’s failure to be faithful to God, God’s desire to be in fellowship with man did not change. And so, He provided a way — from the beginning — to bring us back into fellowship with Him. God provided a sacrifice in the garden by way of an animal’s skin to cover Adam and Eve’ shame and sin. That first sacrifice is yet another way the Father was pointing us to the ultimate sacrifice made by His Son. Not only did Yeshua provide an everlasting atonement for our iniquities, but He also gave us a way to return to fellowship with the Father.

Yeshua’s sacrifice was the beginning of that ultimate reconciliation between God and humankind. It is because of the same love and desire to be in fellowship with us, that He gave us His Holy Spirit to dwell within us, and to lead us to walk with accordance to His ways.

How does this connect to Shavuot? Remember that the Torah was given fifty days after the Passover; the Holy Spirit was also given fifty days after the Passover. The number fifty symbolizes freedom. I believe that Shavuot shows us that God gave us the freedom to live a life holy unto Him, according to His Torah (His teachings), and guided by His Holy Spirit. And He did all this to be in fellowship with us!