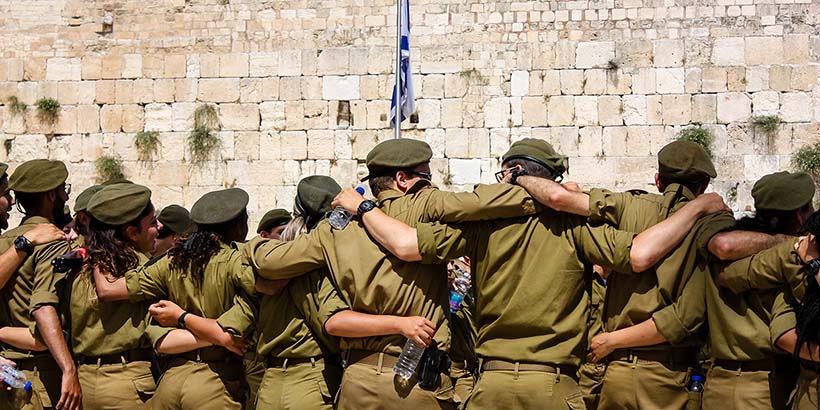 We were delighted to be able to sit down this month with one of our believing lone soldiers, and we would like to share with you some of her experience participating in our youth discipleship program.

Sergeant S was drafted in December of 2022 to the Combat Fitness branch of the IDF, and was trained to equip IDF soldiers and officers to succeed in the physical demands of their jobs, both on and off the battlefield. She was placed at the end of an intense, three-month course in the Search and Rescue Brigade, part of the IDF’s Home Front Command.

“My soldiers’ job is to protect Israeli civilians,” said Sgt. S, about her unit. “The combat training in our brigade includes intensive training in rescuing civilians from collapsed buildings caused by natural disasters or rocket fire. Therefore, my job as a combat fitness instructor is to prepare them physically for this demanding work.”

When asked about this time in her life personally, Sgt. S replies that it was one of the most challenging times in her life.There were a few factors adding to the difficulty of her service. Firstly, she explained that the reality of IDF service is different from the way it is portrayed in the media abroad. Sgt. S told us that as a new soldier, she realized the meaning of the word “service” for the first time.

“It was my childhood dream to come to Israel,” she explained. “But being a soldier is not as “macho” as it sounds. You’re cut off from your home, your friends, and from other believers. Sometimes it’s not clear why you’re doing what you’re doing. The army isn’t always very professional. You have almost no personal space. One of the greatest difficulties for me was the contrast between what I expected the army to be like and what it’s actually like. It creates a dissonance, and especially as a lone soldier, made me doubt at times whether I’d made the right decision in drafting. But with time, I realized that while it can be difficult and draining, army service is also necessary for Israel’s safety. Ultimately, I am proud to have served and I do feel that I contributed in a meaningful way.”

Another challenge came in the form of the coronavirus, which for many soldiers meant that they could not go home or see loved ones, sometimes for months at a time.  “I would go weeks without seeing other believers,” said Sgt. S. “I would see another believer in the army, and even if I didn’t know them very well, we’d get really excited to see each other.”

This was one of the reasons that it cheered her up to receive hand-delivered Hope for Israel care packages. It was encouraging to know that people cared about supporting her service and her personal well-being.

“They cared enough to ask what we preferred in the packages,” she said. “As someone who has a lot of allergies, this made a difference for me. I could say, ‘I can’t eat milk’ and all the sweets that I would receive would be dairy free.”

It meant a lot that the packages were personalized, and not just mass produced. Somebody thought specifically about each soldier while they were making his or her package. For lone soldiers, the packages would often include hefty gift cards which could be used at grocery stores as well as for buying necessary home supplies such as towels, dishes, and basic clothing. For lone soldiers, money is a constant worry, as is the ability to successfully run an apartment, with extremely limited time at home. While Sgt. S expressed that she felt often disillusioned during this time in her life, receiving help and blessings from HFI was always encouraging.

“I knew that I could turn to the HFI staff for support,” shares Sgt. S. “I always felt appreciated. Later in my service, I reached out to one of the leaders and asked if she knew of a place where I could volunteer a couple times a month. She immediately invited me to come to NerYa, HFI’s high school believing youth group. This was special, because one of the things that the youth group does is write letters to believing soldiers which are included in holiday care packages, many of which I have received. For me it was coming full circle to work with these teenagers as they supported other soldiers.”

Sgt. S’s story shows the effort that Hope for Israel invests in creating mutual support systems between believing young people of different ages. She additionally shares regarding her volunteering at NerYa, “The HFI staff met me where I was as a soldier. They appreciated and incorporated what I had to give, but also gave me time to rest when I needed it. I was able to connect with the youth on a personal level, as well as presenting intellectual content to them, usually on current events and critical thinking in the modern world. I loved having this opportunity.”

Sergeant S. reaches the end of her service this month and is excited to move on to the next stage of her life, looking forward to drinking coffee every morning on her balcony, which overlooks the heart of Jerusalem, and to pursuing different interests that she hasn’t had time for during the army, including studying spoken Arabic and taking ballet lessons.

She chuckled, recalling weekends when HFI staff delivered holiday care packages and exhausted from her week in the army, she would go out to the street to say hello dressed in pajamas and flip-flops.

“I’d go back inside and open the package, excited to see what was inside. It was always something new. Sometimes my roommate and I would have movie nights, surrounded by bags of chips, popcorn, and Oreos. And I would know that on my way to base the next week, I’d have a free coffee and sandwich thanks to the coffee shop gift cards that are often included in the holiday packages.”

We asked Sgt. S if there was anything she would like to say to our partners, and she said, “I want to say that just like you and HFI didn’t take my contribution to Israel for granted, I don’t take your contribution for granted. Thank you so much for making HFI’s work possible. It means the world.”

2 Comments on “A Lone Soldier’s Story”