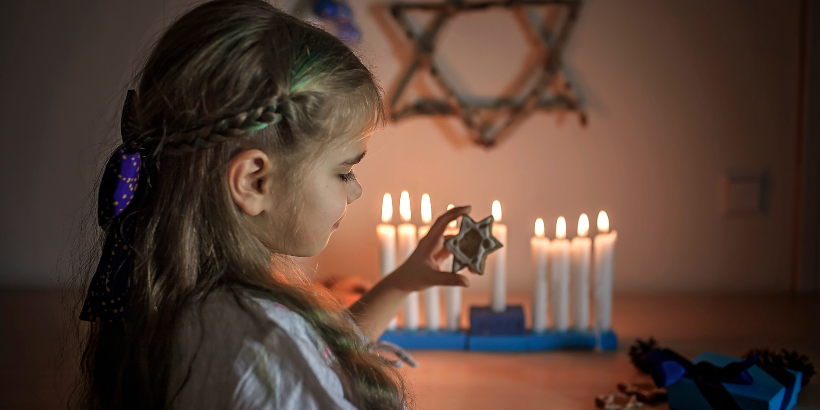 Hannukah , often called the Festival of Lights, is a story of national courage and redemption, and generally centers around Matityahu the High Priest, and his five sons, especially his second son, Judah. However, I would like to shine light on two other stories of Hanukkah that are, in my opinion, equally as important.

While the traditional Hannukah tale features male protagonists and centers around courageous action and strategy on the battlefield, the stories of Chanah, daughter of the High Priest, and Yehudit, a young widow, feature women and focus on subversive and scandalous action. It is much harder to prove the historical accuracy of these two stories, possibly leading to them being less well-known, yet they contain an important message: oftentimes, shining God’s light, symbolized at Hanukkah by the lighting of the eight-branched hanukkiah, is controversial, even among God’s followers.

There are three different versions of Chana’s story, two of which feature a passive damsel in distress, and the third a defiant girl. It is this third version that I want to elaborate on because it fully illustrates my point.

All three start the same way. Chana, the daughter of the high priest, was engaged to be married to Elazar the Hasmonean (a prominent family, who would form a ruling dynasty after the rebellion against the Greeks). However, as part of the Greek oppression of the Jewish people, Jewish brides were required by law to spend their wedding night, not with their new husbands, but with the regional Greek governor. This horrible practice was a common form of psychological warfare in ancient times.

Now the different accounts diverge. According to the version we are following, Chana, determined not to undergo this ordeal, decided to take a stand. At her wedding feast, she stood up on the table, and ripped her dress open, exposing herself to her fiancé, father, and brothers, not to mention the other wedding guests.

As her angry and embarrassed brothers stand up to kill her, and thus right the family honor, Chana begins to speak. “You would kill me for the crime of exposing myself,” she cried, “but when the ‘uncircumcised one’ comes tonight to abuse me, you would turn away? Remember Dinah, who was raped, and instead of accepting her disgrace, her brothers between them killed an entire city for her sake. And you are five, and they were only two.”

Abashed, the brothers paused and looked at each other. One by one, they turned away and sat down again. Chana also returned to her seat.

Inspired by Chana, the brothers determined to try to trick the governor. As members of a prominent Jewish family, they turned directly to the king. “Surely we are high enough in rank for our sister to spend her wedding night with you?” they suggested. And as the king accepted their proposal, the brothers stabbed him in the heart, thus beginning the Maccabean rebellion.

This story offers a contrast to the traditional account which credits the brothers with starting the conflict themselves after seeing the defilement of the Temple. Here it is not the Temple, but their sister who is in danger of being defiled (according to cultural norms) and it is she who takes the risk necessary to goad them into action.

Her action is shocking certainly, and controversial. But if given the choice between the decision she made and submitting to the immoral and traumatic “first night rights” of the governor, it is also understandable. If she exposed herself not just out of a desire for self-preservation, but to save other young brides from the same fate, it could even be called noble. Whether she could have accomplished her goal differently is open to debate.

Judith, or in Hebrew, Yehudit, was a Jewish widow. Her husband, incidentally, was also named Elazar. She was well-known in her community for her acts of charity. Her town was besieged by a Greek general by the name of Holofernes, famous for his cruelty in putting down rebellion.

The villagers held out against Holofernes for a long time, but eventually their food and water stores were low, and the villagers began to lose hope of deliverance. They argued amongst themselves whether to capitulate to the famous general, and eventually decided to wait five more days. If no salvation had come at the end of the five days, they would surrender to Holofernes.

After the meeting, Yehudit came quietly to the leaders of the town and told them, “Give me your blessing to go to meet Holofernes. Perhaps I can convince him to let us remain free.”

The leaders, fearing that she would be raped, at first would not let her go. But she pleaded with them, and finally, they let her go, together with her maid, to the Greek army camp in the valley. The two women brought with them a large basket of delicacies with which to tempt the Greek general.

Yehudit told Holofernes that she would spy for him in her town if he would agree to preserve her family after the town was conquered. Holofernes agreed, and Yehudit and her maid were given permission to pass freely from the town to the army camp. Soon Yehudit had gained the general’s trust, and one night, she prepared for him a feast, complete with strong wine.

Holofernes became drunk, and finally fell asleep. Yehudit took a deep breath, prayed for strength, and drew the general’s sword from its sheath. She brought it down with all her might on the Greek’s neck, severing his head.

She packed Holofernes’ head in her basket, and together with her maid, returned to the town. The next morning, the Jewish soldiers attacked, and when the Greeks discovered that their general lay dead in his tent, they were filled with panic and scattered.

Yehudit had risked her life and her reputation, and thanks to her daring, the town was freed.

I cannot help but be reminded of the story of Yael, from the book of Judges, who similarly seduces an enemy general. He also let down his guard, allowing Yael to kill him. Perhaps the story of Yehudit was inspired by the story of Yael. Whether this is true or not, there is certainly an interesting parallel between the stories.

Throughout the Tanach (Torah, Prophets, and Writings,) there are numerous comparable stories of the scandalous actions of women which saved sometimes their intimate loved ones, and sometimes the whole people of Israel. Most of the stories involve trickery and the manipulation of male desire  to achieve the woman’s goal.

The message in these tales is not that women must be provocative to be successful. These are women who are described as righteous. These are stories of women who had a higher goal, who desired justice and righteousness, and who were prepared to set aside their reputations to achieve their goal: not because they took pleasure in it, but because they saw no other option. You can see Yael fighting not to throw up as she hammers the tent peg through Sisera’s temple. It is not a pleasant thought. Neither is it pleasant to put oneself in Queen Esther’s shoes, coming to her husband to ask a favor, and fearing for her life. Not the ideal marriage.

However, her famous words, “If I perish, I perish,” express the hearts of all these women, who acted in great faith and determination, rooted in a desire for God’s justice.

We light the Hanukkah candles for eight days, adding one candle each evening, and placing the hanukkiah in the window for all to see. These candles symbolize the victory of the Maccabees over the Greeks, of light over darkness. For believers, they are also a reminder of Yeshua’s words:

It is important to remember that the purpose of light is to illuminate darkness; as evidenced by the stories of Chana and Yehudit, it takes bravery in the face of controversy and the willingness to take risks. This Hanukkah season, may we all be inspired by the stories of these women who braved scandal to save their people, and remember that sometimes, all it takes is one voice to make a difference.