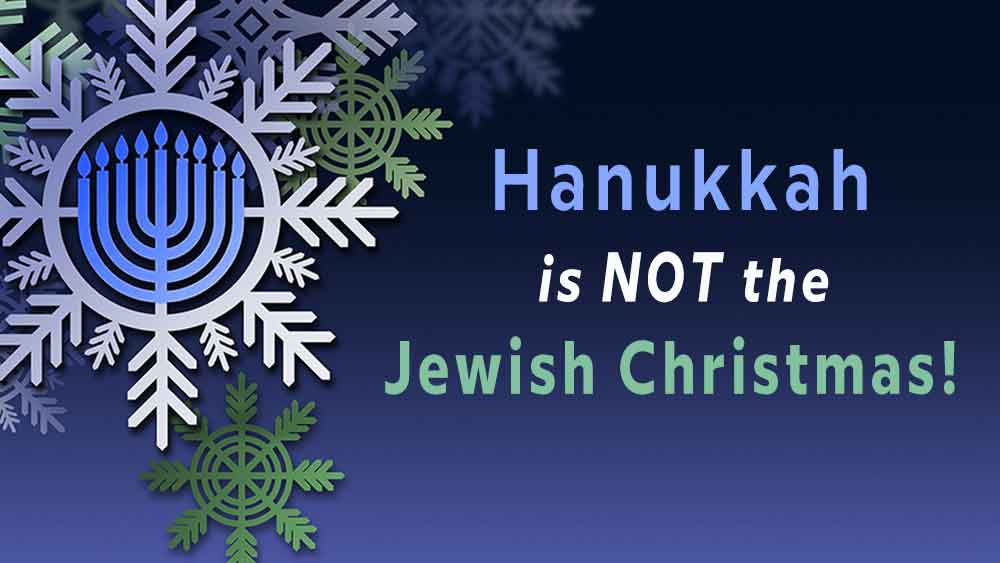 I must confess that I was not quite aware of Hanukkah until I came to the United States in 1985. Growing up in Argentina, the holidays I was mostly familiar with were Passover and the High Holy Days (Rosh Hashanah, Yom Kippur, and Sukkoth).

Imagine my surprise when I came to the United States and found out there was a major Jewish holiday in December I had been missing! Some fellow secular Jewish people and even some well-intentioned believers explained to me that it was “the Jewish Christmas.” I was dumbfounded! Jewish Christmas?? What strange thing was this? The only thing I remembered celebrating in December was the great dinner my grandfather Henry (who owned a bodega type grocery store in his neighborhood) would throw because he sold a lot of food and drink during Christmas.

It was explained to me that Hanukkah was the Jewish Christmas for several reasons. First, it happened in December. Secondly, Jewish kids would get gifts like their non-Jewish friends would get on Christmas. Thirdly, just as non-Jewish families got to turn on the lights for their Christmas trees, we Jews got the chance the light the Hanukkiah (an eight-branched menorah). Finally, Jewish families (like their non-Jewish neighbors) also decorated the front of their homes. You can even see this today. If you drive through a neighborhood, it is easy to see: Red and green lights mean there is family celebrating Christmas, while blue and white lights mean there is a Jewish family celebrating Hanukkah.

It seemed that this was an effort by many Jewish people to be more like “everybody else”. Hanukkah became an important holiday in North America beginning in the 1960s and now, it has become a major holiday in many parts of the world despite the fact that it is not mentioned in the Torah and only in one page in passing in the Talmud. Even in Argentina, my home country, now the lighting of a giant Hanukkiah in a prominent park is a major public event attended by government officials!

And yet, Hanukkah is not the Jewish Christmas. It is not about giving gifts. It is not about decorating one’s home with blue and white lights, which compete with the green and red ones in the homes of your neighbors. It is about something much more profound and significant. It is about something many people have been thinking about a lot during this strange and bizarre year that is coming to an end.

It is about deliverance, freedom, and most importantly, God’s faithfulness.

Hanukkah means “dedication” and it conveys a story of the deliverance of the Jewish people from an oppressive ruler called Antiochus Epiphanes. Antiochus was a Greek ruler who wanted the Jewish people to assimilate into the Greek culture, language, and pagan religion. To do that, he outlawed faith in the God of Abraham, Isaac and Jacob. He prohibited the study of the Torah, the observance of Shabbat, circumcision and he even ordered people to worship Zeus, the Greek supreme god.

Because of the resistance of the Jewish people, he went as far as to desecrate the holy Temple in Jerusalem. He ransacked the Temple, desecrated the altar by sacrificing a pig on it, and placed a statue of Zeus in it. Such offense was too much for the Jewish people who rose up and fought against Antiochus and his troops. The Jewish people, led by a small but mighty group called the Maccabees, prevailed and they liberated both Jerusalem and the Temple.

Tradition states that, as they went into the Temple to rededicate it to the LORD, and light the Menorah, they discovered they only had one day’s worth of oil to burn. It would take eight days to manufacture more oil, which meant the Menorah would only be lit for one day. But, a miracle happened! The light in the Temple burned for eight days even though there was only enough oil for one day.

God performed a miracle! Hanukkah is about the miracle of freedom because after these events the Jewish people were free to go back to worship the God of Abraham, Isaac, and Jacob. They were no longer oppressed by a mad and wicked ruler.

During 2020, we have experienced an unusual oppressor: it is invisible, silent, and untouchable. And yet, its presence is evident. It has isolated us, and caused incredible loneliness. It has stopped us from traveling. It has changed the way people look at things, such as formerly innocent grocery bags, which now can be carriers of a virulent disease. It has changed the human landscape as now most people wear masks wherever they go. It has sown fear in the hearts of people as the list of victims of the COVID-19 virus grows every day.

Yet, for those of us who know Messiah Yeshua, we know that we have been set free from any form of oppression or bondage; He has set us free from the oppression of sin and spiritual death! As Romans 8:12 proclaims:

Rabbi Shaul says this again in Galatians 5:1 when he writes:

For freedom, Messiah set us free—so stand firm, and do not be burdened by a yoke of slavery again.

Let us remember this greatest miracle of all time as we celebrate the miracle of Hanukkah in 2020.

2 Comments on “Hanukkah is not the Jewish Christmas”