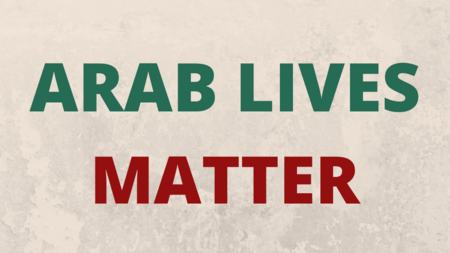 Sukkot is a time to remember our fellow person. During this season, we pause to remember not only God's provision for the children of Israel after their redemption from Egypt, but also His provision for the foreigner. We remember the rich symbolism of what Sukkot represents for our past, as well as what Sukkot represents for the future. Prophetically, Sukkot gives us a picture of what a post-apocalyptic world will look like, where those left from the nations will worship the Lordin Jerusalem:

Then all the survivors from all the nations that attacked Jerusalem will go up from year to year to worship the King, Adonai-Tzva’ot, and to celebrate Sukkot.
Zechariah 14:6

In short, Sukkot reminds us that all people matter to God. And they should matter to you and me.

It is fitting that during this Sukkot week, Jewish and Arab Israelis staged numerous demonstrations to protest the sharp increase in violence within the Arab communities in Israel - and the difficulty that Israeli officials have faced in addressing it. Intra-communal violence among the Arab population has become endemic. Last year, 2020, was the deadliest year in recent memory for Arab Israelis.[i] By the end of December 2020, 96 Arab Israelis had been killed by fellow Arabs, a 50% jump in the murder rate in four years. Although Arab Israelis comprise 21% of the population, they account for 71% of homicides in the country in 2019. And these murders happen at the hands of their fellow men.

Many Israeli Arabs blame organized crime within the community. Arab mafias have been flourishing and the Israeli police have been largely unsuccessful in stopping them. Because the Arab sector has been largely neglected by Israeli authorities in recent years, these mafias have filled in vacancies as a result of the neglect. Access to illegal weapons, loan sharking practices, and other criminal activities have put these mafias in control of many Arab communities with disastrous results.

Furthermore, "turf wars" between many opposing factions have created dangerous conditions in these communities, where murders often happen on the street in broad daylight.  Tragically, a vast majority of these murders go unsolved, which only further emboldens criminal activity. Mahmoud Abbas, the leader of United Arab List, an Islamist party serving in the current Israeli government, says that the violence extends beyond murders that are usually reported in the Israeli press: “Homicides are just one parameter in the violence: Attempts to gun down mayors, threats, extortion, blackmail, domestic violence, use of weapons in disputes...” are all part of the problem.

With a whopping 60% of Arab Israelis saying they feel unsafe in their towns because of the violence, as opposed to only 12% of Jewish Israelis, it is imperative that Israeli officials find creative ways to address this problem. It should not go unnoticed, however, that Israeli officials are grappling with an incredibly sensitive situation. If they crack down on crime in the Arab sector too harshly, they will be accused of racist policing; if they do nothing, they will be accused of not protecting the Arab population or of unfair treatment. Because of the cultural (and political) sensitivities at play, the challenge is to work with the leaders of the community in order to find viable solutions to the problem. But this must happen sooner than later.

Israel is a country of all its citizens; this is the very essence of democracy. Not only does the representation of its citizens matter, but also does their security. Israel cannot afford to turn a blind eye to dangerous violence in any of its communities. A country's strength and dignity can be measured by how it treats its minorities.

We, at Hope for Israel, consider it one of our greatest privileges to come alongside our fellow Arab brothers and sisters, because we know God's heart longs to be reconciled with them, too. Let's join together to pray for peace within all of Israel, for Jew and Arab alike. Let us remember that God's plan for Israel is not just for the Jews, but also for the foreigners in our midst.