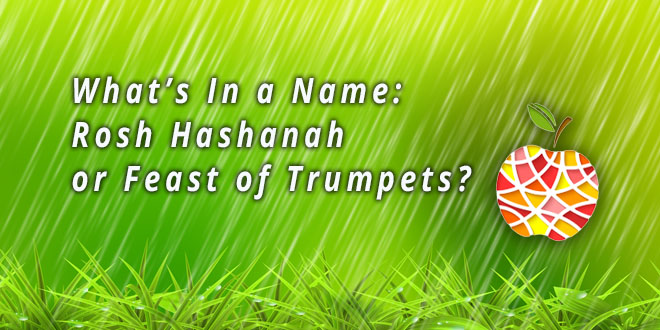 The biblical “Feast of Trumpets” is upon us! Actually, most people know this special holiday as “Rosh Hashanah,” or the Jewish New Year, which is a bit misleading because this holiday originally had nothing to do with a new calendar year. So where did this association between the Feast of Trumpets (Leviticus 23:24) and the Jewish new year originate?

Rosh Hashanah is a combination of the Hebrew word “rosh” (“ro” as in “row”), which means “head” and “hashanah”, which means “the year”. Together, “Rosh Hashanah” means “head (of) the year”, which is understood to mean “the new year”. However, Rosh Hashanah, or more accurately, the Feast of Trumpets, occurs on the 1st day of the seventh month on the Hebrew calendar (a Hebrew month that typically begins in September or October). If the first month of the Hebrew calendar begins in the spring, just two weeks before Passover, why is the Feast of Trumpets – Rosh Hashanah- called “the new year”?

It may seem strange or even illogical to think of a new year taking place in the 7th month of the calendar year. But most western nations have our own kind of “new year” in August/September – a new school year! Although August or September are the 8th and 9th months of the year, these months act as a new year of sorts for those attending school or having children who are attending school. So this idea of a “new year” in the middle of the year doesn’t seem so strange after all.

Yet, if we consider ancient cultures, it is more likely that agricultural or religious new years were even more influential than a school year (if one even existed). For agricultural societies in the Mediterranean and the Middle East, the agricultural new year began when water for irrigation became more bountiful for the year. In ancient Egypt, the agricultural new year began in July around the time when the Nile River began flooding, marking the beginning of the time of the year when water was bountiful in Egypt. In Babylon and Assyria and other Mesopotamian cultures (just east of Israel), snow began to melt in the spring on the peaks of the Taurus mountains in what is today Turkey, thereby filling the Tigris and Euphrates rivers with abundant water and marking the beginning of their agricultural new year.

Unlike Egypt and the Mesopotamian Civilizations, Israel has always depended on rain (that begins to fall in September or October). Although Israel does enjoy water from the Jordan River and from a number of water springs year-round, it is the rain that provides Israel with an extra boost of water beginning in the fall each year. Deuteronomy 11:11 may be referring to Israel’s dependence on rain when it speaks of God’s promise to deliver the Israelites into a land that “soaks up its water from the rains of heaven”.

Whatever the reason, it seems wise for all of Israel (and the Jewish people throughout the world) to stop at this time of year, and remember just how dependent we are on God’s merciful provision of rain for an abundant harvest, and to sustain life. So whether you observe the Feast of Trumpets – as the Lord commanded Israel to do in Leviticus 23 – or call it the Jewish New Year, “Rosh Hashanah,” the important thing to remember is that only He can give us abundant life! Yeshua is our Living Water…in Him we have eternal refreshment for our weary souls.