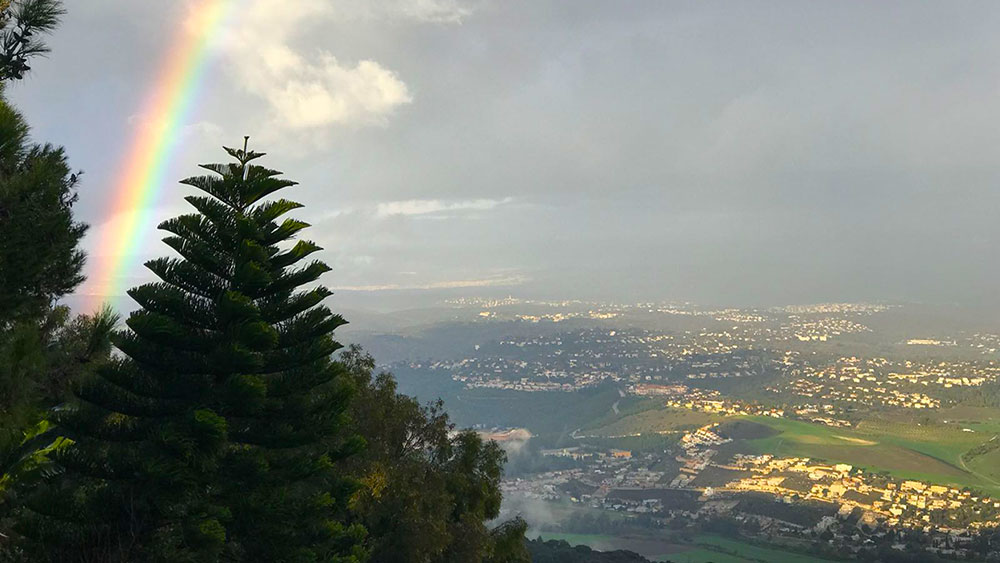 Pictured above: The Jezreel Valley on a rainy day in Israel.

Rainfall can be both a blessing and a challenge; too much rain can lead to flooding, but if not enough rain falls, it can strain a country's fresh water sources. Israel is a country that gets almost all of its water from rainfall, mostly from December to February, although some rainfall occurs in the months leading up to December and the months following February. By summer time, however, not a cloud can be seen in the sky during the day in most of Israel and especially no rain. Three months are really what decide whether or not Israel is experiencing a drought. In Israel, a “drought year” is defined as a year in which the rainfall was less than 80% of an “average” year.

Water Efficiency
Of course, as a nation that has often experienced droughts throughout history (as seen even in the Scriptures multiple times), Israelis have developed a number of ways of capitalizing on the water resources available without depleting them. Thanks to careful legislation, Israel typically only uses about 95% of its renewable water resources. In fact, Israel has become the most efficient country in the world where water usage is concerned.

Israel recycles about 90% of its wastewater for use in agriculture, which is four times higher than the next best nation (Spain is second highest in wastewater recycling with about 20% recycled). Traditional irrigation methods allowed for a mere 64% efficiency in use of water for agriculture, but Israel’s drip irrigation has made Israeli agricultural use of water 90% efficient (click here to learn more about how Israel is changing how water resources are used in agriculture today thanks to drip irrigation). Israel uses only about two thirds of the water per acre that it did before drip irrigation and produces 12 times higher yield using only as much water today as was used 50 years ago. Israel is truly blessed with what water it has, but good stewardship of the water is crucial to Israel’s survival.

Plentiful Rainfall: Blessings & Challenges
This year is the first year after a 5-year drought that most places in Israel have not only exceeded 80% of their average rainfall but are close to or have surpassed their average rainfall! The level of water in the Kinneret lake (the “Sea of Galilee”), is now barely a meter below the upper red line. If water gets too close to the upper red line, Israel will open a dam from the lake into the Jordan River that has not had to be opened since the storms of 1992! This is exciting and many people are hoping and praying for just such a year in Israel, but even the rain we’ve received so far is a HUGE blessing.

You would think that all this rain would only be good for Israel, but there is one catch: refilling the Kinneret so fast is also creating unique challenges for the balance of “good” and “bad” algae on the lake. There are toxic algae, called cyanobacteria, first noticed on the lake in 1994 that are getting the upper hand on the lake right now. These toxic algae are costly for Israel’s water experts to keep out of our drinking water. These bacteria must be removed from water in order to be safe for humans to drink. Some studies have indicated that people living within close proximity to lakes having high concentrations of cyanobacteria appear to be 2.3 times more likely to develop ALS (also known as “Lou Gehrig’s disease”, a disease that causes the death of neurons controlling voluntary muscles). Of course, Israel has high water quality standards, so it won’t get to that point, but it may get expensive for Israel to treat the water if these algae aren’t dealt with soon.

One solution to the algae is to introduce a kind of fish into the lake that eats up the algae. This would also be good for the tourist industry as there are many sports fisherman in the world who might take greater interest in fishing here with the added fish in the lake. Another solution is God! Fish are great and thank God for those who are doing research to address the threats to human health posed by the delicate balance of algae in the Kinneret, but ultimately, God is in control.

Practical Prayer Points
So how do we pray? For more water or for less? Israel needs water, so pray for rain. Israel depends on the rain but years of drought might be God’s grace and not always a judgement on the land. It may be that these drought years have been God’s way of helping to keep this aggressive toxin out of our drinking water long enough for researchers to find solutions.

Please also join us in praying for God-inspired solutions to challenges in maintaining quality drinking water in Israel. Pray for policy makers in Israel who have the power to allocate resources to addressing these issues before they get out of control. Pray for rain in Israel. Who knows? Perhaps we could see the first time the dam is opened into the Jordan River from the Kinneret since 1992! As we are blessed with more rain, however, pray also for the water quality in Israel’s lakes, rivers and aquifers. Pray also for Israel’s tourist industry to continue to flourish as innovative solutions to big problems continue to shape the landscape of Israel for the better.