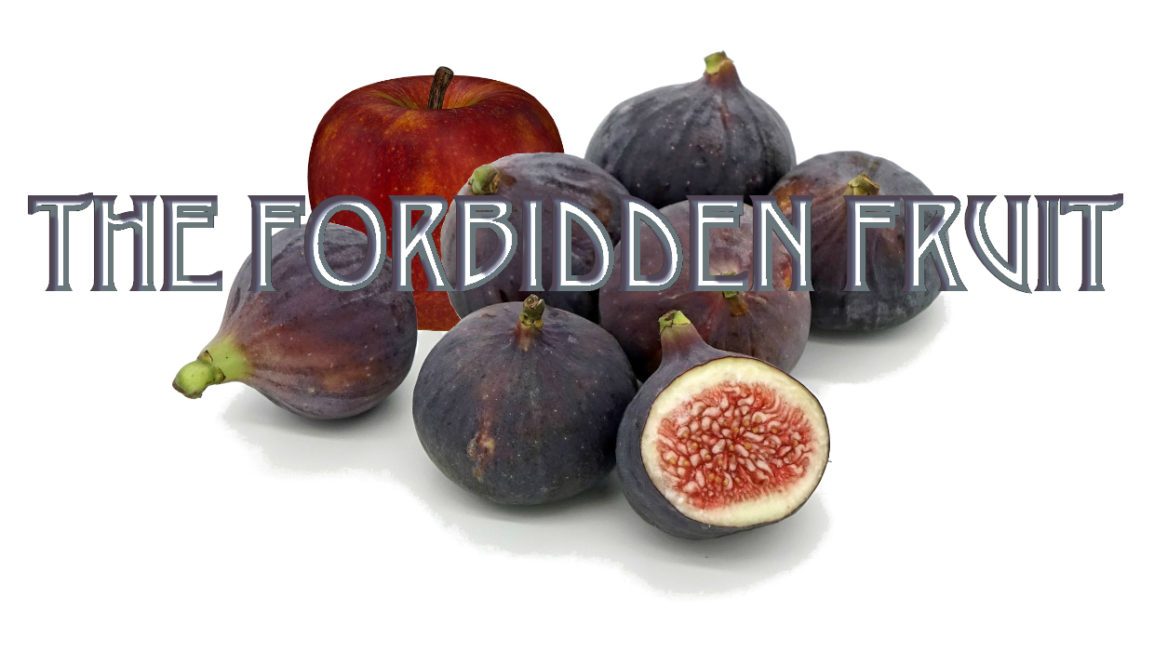 If you speak English, then you’ve probably heard the words “Adam’s apple” being used to refer to a feature that is especially noticeable in certain men. If you’ve been exposed to western depictions of the Garden of Eden and that fateful sin that brought a curse on all mankind (as described in Genesis 3), then you’ve likely also seen at least a handful of portrayals of an apple tree as the tree of the forbidden fruit.

Traditionally, in Judaism, the fruit is described as a fig. Even in Michelangelo’s famous painting of the tree on the ceiling of the Sistine Chapel, we find that the fig tree won the day when it came to depicting the tree of the forbidden fruit. The depiction of this fruit as a fig is fairly natural from the description in Genesis 3:7 of what immediately follows the eating of the fruit:

Then the eyes of both of them were opened, and they knew that they were naked; and they sewed fig leaves together and made themselves loin coverings.

If they used fig leaves to cover themselves right after eating the fruit, it stands to reason that the fruit could have easily been a fig. Apples, on the other hand are nowhere to be seen in most of the Bible, a mere 6 times and mostly in Song of Solomon. Moreover, apples as we know them weren’t really something that grew or were eaten in Israel for much of history.

The depiction of the fruit as an apple is partially thanks to the love of the Romans for the Greek language. In Latin (the language of the Romans), the word for “evil” is “malus” (“ma” as in “mama” and “lus” as in “loose”). Even though the Romans used other Latin words to refer to kinds of apples and apple trees, they also used a Greek word, which when used by the Romans was pronounced “malus”, exactly like the Latin word for “evil”. The fact that “malus” could be both “apple” and “evil” made it easy for any Roman to read the Latin text of Genesis 3 to say “the tree of the knowledge of good and apple”. Even though they would know that the word meant was actually evil, it wasn’t hard to imagine the tree as an apple tree.

As if the word play weren’t enough, it’s likely that when the Romans read about Adam and Eve in the Garden of Eden, they were reminded of a pagan story in Greek mythology. The Greeks told a story in which a goddess presented two other Greek gods with an apple tree in a garden, guarded by a serpent. In the Greek story, the apples are made of gold, thus offering quite the choking hazard to any humans who might attempt to eat them. With God’s assertion to Adam that death was the consequence of eating the forbidden fruit, it wouldn’t be hard for a Greek or Roman or anyone familiar with their pagan traditions to think of the story of the golden apple tree.

Some have noted that since in Genesis 1:27–29, God gives Adam permission to eat from every tree that produces fruit with seed in it, it stands to reason that the forbidden fruit was one that had no seeds. Such a fruit was unheard of until the modern day (today most fruit in developed nations is genetically modified to grow with no seeds in it). The very essence of fruit from a scientific perspective is that a fruit must “contain one or more seeds”. In other words, there was really no fruit that truly fit the biblical description of the forbidden fruit until the modern day, it was one of a kind and apparently never to be seen again (praise God!).

It doesn’t really matter what the forbidden fruit looked like, and in all honesty, it’s probably better that we didn’t know. After all, just looking at it was enough to help Eve along the path to sinning against God. For me, the important thing in all of this is that we realize that the images we grow up with aren’t necessarily the most accurate interpretations of Scripture. With a careful eye and a discerning heart, we grow ever more aware of what is actually written in the Bible and so fall more in love with God’s Word and less enchanted with the vain imaginations of man.

For those of you interested in Hebrew…
Seeing as how Jewish tradition depicts the forbidden fruit as a fig, and since Adam and Eve do, after all cover up with fig leaves after their fateful blunder, here are two words that you can easily learn in Hebrew from Genesis 3 (listen to the audio recordings to hear the words!):