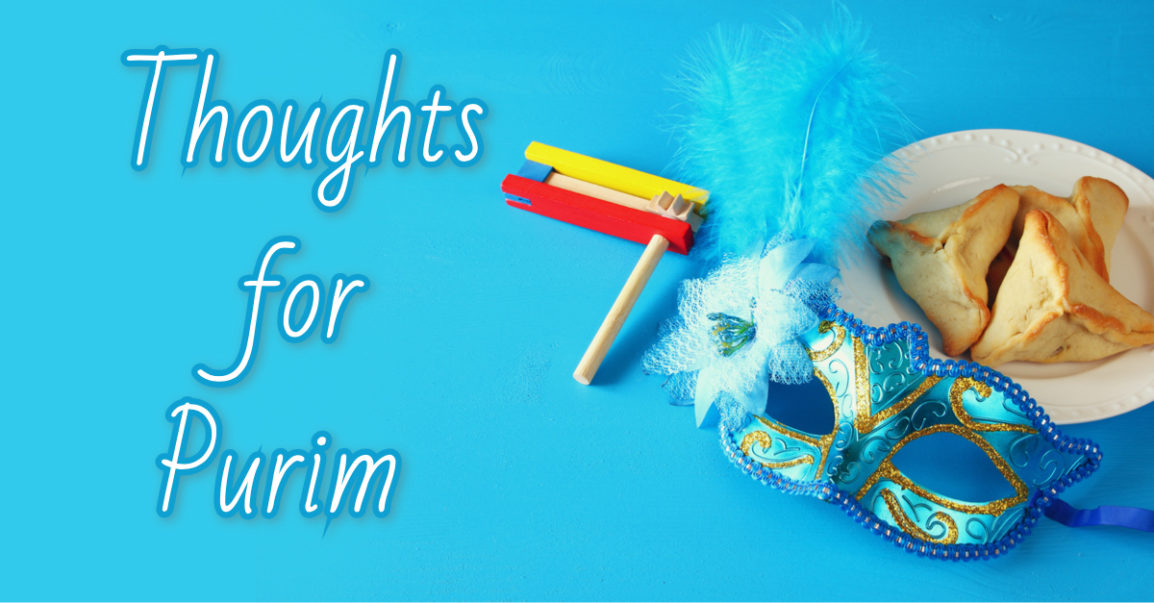 In a celebration known as Purim, Jews all over the world will soon be reading the book of Esther cover to cover. During the reading of the book of Esther, many will re-enact the events recorded within it with friends, family, and/or members of their synagogue/congregation.

The Book of Esther
While many people are already familiar with the story of Queen Esther, it’s worthwhile to review it before we proceed. Queen Vashti refuses to come to her husband, King Ahasuerus, king of the Persian Empire, when he sends his servants to get her. He asks his advisors what the law has to say about such situations and they advise him to make a new law, banishing her from his presence. Esther (AKA: Hadassah), who was raised by her cousin Mordecai in the absence of her parents, is selected to be queen in place of Vashti, but she keeps her Jewish identity a secret from the king. Mordecai and Esther save King Ahasuerus from two officials who had plotted against the king.

Haman the Agagite is made second in power to the king. Mordecai refuses to bow to Haman, so Haman bribes the king for permission to kill all Jews since Mordecai is Jewish. Haman uses “purim” (perhaps pebbles used somewhat like dice) to decide when he will carry out his slaughter of the Jewish people (this is why the holiday commemorating these events is called Purim). Mordecai urges Esther to use her royal status to appeal to the king on behalf of the Jews. Approaching the king uninvited would mean death for Esther, but Mordecai assures her that doing nothing also means death for her.

Esther instructs all Jews to fast for 3 days. After the 3 days, she is invited to approach the king and so takes the opportunity to set up a dinner for her, the king and Haman who doesn’t yet know that Esther is Jewish. Haman is disturbed when he sees Mordecai on his way home from being invited to dinner and upon consulting with friends and family, he builds a gallows upon which to hang Mordecai. The king can’t sleep the night before the dinner and so decides to have a look through the royal annals, at which point he is reminded of how Mordecai saved his life. The king asks Haman what the king may do to honor someone who is worthy of it. Haman thinks the king is speaking of him and so advises the most lavish show of honor. And so, Mordecai is honored according to Haman’s instructions to the king.

Esther appeals to the king on behalf of the Jewish people while dining with Haman and the king. Outraged that his right-hand man would plot against his queen and her people, the king orders Haman to be hanged for his wickedness on the very gallows upon which he had hoped to hang Mordecai. Mordecai is given the authority that was once Haman’s. The genocide planned against the Jews is cancelled and instead, the Jews are given authority to do with their enemies as they please. The holiday of Purim is then established as a time of rejoicing among the people of Israel.

Iran in light of Purim
Iran has a strong history of supporting the Jewish community in Israel and the Middle East until recent decades. Iran was, until modern times, known in the West as Persia because of the great influence that the Persians had over Iran throughout history. In light of Persian influence in Iran even into the modern day and considering the growing tensions between Iran and Israel, it seems fitting to discuss Iran in connection with this week’s Purim celebrations.

The book of Esther tells us that, although the Persian king, Ahasuerus, almost allowed a genocide of the Jews, he was eventually led to promote Jews to the most powerful positions in his empire, allowing the Jews to do with their enemies as they pleased. The Persian support of Jews in the Middle East didn’t begin with Ahasuerus, however; Persian support of the Jews stretches even further back to the time of Cyrus the Great. Cyrus is perhaps the most famous king in Iran to this day. He was a Persian king who conquered much of the Middle East, ending the Babylonian captivity some 2,555 years ago, just 70 years after the Babylonians had conquered Israel (as was prophesied in Jeremiah 25:11–12). In Isaiah 45:1, we even read that God referred to Cyrus as God’s messiah (not to be confused with the divine messiah, Yeshua, but still a most honorable title from God himself). Cyrus not only allowed the Jews to return to their homeland, he also funded their return, as well as their rebuilding efforts.

The Jews who returned to Israel didn’t have it easy, but multiple Persian kings arose to ensure their wellbeing. The book of Ezra tells us that, much like today, the non-Jewish people in Israel sent letters of complaint to numerous rulers concerning the Jews returning to their homeland (Ezra 4:5–7). These complaints began from the start of the Jewish return to Israel in the days of Cyrus and continued into the days of Darius, Ahasuerus, and finally Artaxerxes (the ruler at the time when Ezra and Nehemiah returned). And yet Ezra tells of at least 3 Persian kings who, in spite of opposition, supported the return of Jews to Israel (Cyrus, Darius, and Artaxerxes). What a different reality we live in today: Iran is now home, not to allies of Israel, but to one of their greatest enemies.

Even after biblical times, it was a Persian alliance with the Jews of Israel that led to overthrowing the Byzantine Empire in Israel by 614 AD. In fact, Iran’s opposition to Israel and Jewish presence in this land is a fairly recent trend (beginning just 40 years ago). Iran was actually the first nation in the Middle East to recognize the validity of the re-established state of Israel in 1950, just 2 years after Israel’s declaration of independence. It wasn’t until the Iranian revolution in 1978, nearly 30 years later, that Iran became an enemy state of Israel and perhaps the greatest enemy of Israel since then until the present day. What a change from the rich heritage of Persian support of Israel at various times throughout history even back to biblical times.

I have had the privilege of getting to know a number of Iranians in my lifetime both in Israel and abroad. Every Iranian I have ever met, including Muslim Iranians, has voiced support for Jews. I have even met a number of Iranians who whole-heartedly support the state of Israel. I have also heard from a credible friend recently, who works directly with many Iranians that those with whom he works have expressed that a very small minority of Iranians actually supports the radical Islamic policies of the current terrorist regime. We would do well to pray that in the course of the next many years the majority of Iranians, currently powerless against their supreme leader, would have an opportunity to restore righteous government in their nation that would bless Israel and end the tensions that have continued these 40 years between Iran and Israel.