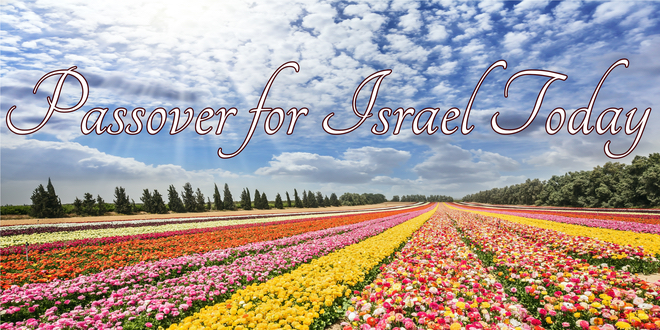 Many things may come to mind when it comes to Passover… matzah (traditional unleavened bread), the Seder (the Passover meal), the 10 “plagues” against Egypt, the blood of the Passover lamb on the doorposts and the sparing of the firstborns, as well as the Exodus from Egypt. More spiritual realities may also come to mind: deliverance from slavery to freedom, literally and figuratively; enduring hardship in hopes of eventually reaching one’s own “Promised Land”; Messiah Yeshua, our “Passover Lamb”, who “has been sacrificed” and whose blood covers our sin, sparing our soul from eternal separation from a holy God (1 Corinthians 5:7). But there’s more to this ancient historical event than we may perceive! While all these associations are accurate and important, Passover is also about God fulfilling His promise to bring the Children of Israel to the land of promise.

Before God delivers the children of Israel from Egypt, He sends Moses to them to tell them, “I will bring you to the land that I swore to Abraham, Isaac, and Jacob, and I will give it to you for a possession…” (Exodus 6:8). How would you feel if God sent someone to you right now to tell you that He was about to change your life for the better? Would you believe it? All of us have challenges in our life that can seem to us to be a normal part of life, even if there have been times in our life where we knew God had something else in mind.

The people of Israel initially “did not listen to Moses” because of the hard circumstances they faced (Exodus 6:9). Who could believe that after 400 years and while they were slaves in the most powerful nation at that time, God was preparing to return the children of Israel to the land He promised so long ago?

Since that first return in the days of Moses, Israel has seen two later periods in which the Jews were forced to leave Israel for a time before returning to the Promised Land. One was during the Babylonian Exile nearly 2,600 years ago, and one was after the Jewish-Roman Wars about 1,900 years ago. After the wars with the Romans, the land of Israel was mostly devoid of Jewish presence (with only a few thousand remaining), until the 1800’s when anti-Semitism in Russia and Europe forced many to look for refuge elsewhere.

For many, returning to Israel was their only hope for freedom. By a miracle of God, in spite of the horrors of the past century and a half, many Jews were able to return to Israel and re-establish a Jewish state in the Promised Land. There are still many forces at work in the world that seek to obscure God’s promise to the Jews. Jews all over the world face anti-Semitism. Jews in Israel face anti-Israel legislation in the international community that seeks to delegitimize the Jewish presence in Israel. Jews in Israel also face the threat of terrorist attacks from both within Israel and from the surrounding nations, especially Iran.

I wouldn’t be surprised if someone were to tell me that there are more failed attacks against Israel every day than in any nation on earth. I feel safer here than anywhere else I’ve been in the world and yet I’m reading constantly about attempted attacks, even in my own neighborhood. After nearly 2,000 years of living in foreign lands, thousands of Jews each year are daring to trust that now is their time to return to the Promised Land. Today, Israel is home to Jews who have returned from over 100 nations and from every inhabited continent of the world.

For those of us living in Israel today, it is clear that God has a plan for the people and land of Israel. Passover is about more than the past or even things to come, it’s also about the here and now: God is bringing His people back to the Promised Land even in our day and protecting all who live within Israel’s ancient borders.