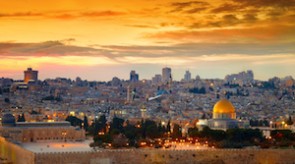 The city that has been held dear by so many for thousands of years; she has been called “The City of Truth” (Zech. 8:3), “The City of God” (Ps. 87:2), “A Holy Mountain” (Daniel 9:16). She carries many names, even the name of God (1Kings 11:36), yet we have come to know her as Jerusalem. To the naked eye, one would see a city that sits 27 miles inland from the coast, has no natural resources, is built upon the ruins of previous structures and is the center for struggle and conflict in the Middle East. What is it about this ancient city that continues to draw the attention of the world throughout the generations? Why was she forgotten by the world throughout the Diaspora until the Jewish people returned to inhabit her? What is so special about this mountain made of stone?

To answer these questions, we must understand that the importance of Jerusalem lies in her spiritual aspect, not her physical makeup. In Ezekiel, God declares His mercy and blessings on Jerusalem and that He has made a covenant with her. It is a city God has instituted to be His tabernacle and the place He has chosen to establish His Kingdom where He will reign in the New Earth, a Heavenly Jerusalem (Rev. 21). It is from His throne in Jerusalem, where God will judge the nations. We know from the prophet Zechariah that in the final days, Jerusalem will be a place of contention among the nations. The Lord says, “On that day, when all the nations of the earth are gathered against her, I will make Jerusalem an immovable rock for all the nations. All who try to move it will injure themselves” (Zechariah 12:3).

After the Independence War of 1948, Jerusalem was divided between Israeli and Jordanian control. For 19 years the Jordanians held east Jerusalem, including the Old City and the Western Wall, while west Jerusalem was in Israeli hands. It was not until June 7, 1967, during the Six-Day War, that the entirety of Jerusalem was reunited and brought back under the control of the Jewish people for the first time in 2,000 years. This was the first time the Jewish people entered the Old City, to kiss, weep and pray at the stones of the Western Wall, the holiest site in Judaism. For thousands of years, the Jewish people longed to return to the final remains of the temple, every day praying towards Jerusalem. Now, despite all the odds against them, God delivered Jerusalem into the hands of His people. In the words of Israeli Commander Motta Gur speaking to his brigades, he says, “Endless words of longing have expressed the deep yearning for Jerusalem that beats within the Jewish heart. You have been given the great privilege of completing the circle, of returning to the nation its capital and its holy center. Jerusalem is yours forever.”

It is a miracle that this tiny nation survived the Six-Day War of 1967. Israel was an established nation for only 19 years at the time the war began. They were completely outnumbered by four well-supplied enemies and estimated to face large-scale causalities if they were to survive at all. The armies of Egypt, Syria, Jordan, and Lebanon surrounded the borders of Israel in hopes to push the Jews to the sea. All together, the Arab armies numbered roughly 465,000 troops, 2,880 tanks and 900 aircraft. This is compared to Israel, which had only 264,000 soldiers (200,000 were reservists), 800 tanks, and 300 aircraft. By complete surprise to the Arab armies and the world, within six days Israel was not only able to defend itself, but they also took over new territory including the Gaza Strip, Sinai Peninsula, Golan Heights, Judea and Samaria, and East Jerusalem, including the many holy sites and the Temple Mount. In the end, Israel reported 760 casualties, while the Arab deaths ranged around 18,000 men. It was a complete miracle.

To this day, Jerusalem remains a united city where the Jewish people can freely visit and pray at the Jewish holy sites. However, Jerusalem also remains the center of conflict and tensions between Israel and its Arab neighbors. The fight for control of Jerusalem is one of the central issues revolving around the political “peace agreements.” There are still great efforts to divide the holy city and remove Israel’s jurisdiction of East Jerusalem. Many proposals claim that Jerusalem should be made an international city where no one nation has authority, and oversight is given to the United Nations. Herein, we are already seeing today the beginning fruits of the fulfillment of Zechariah’s prophecy that God will “make Jerusalem a cup of staggering to all the surrounding peoples” (Zech. 12:2).

We do not know God’s exact timeline of when all these things will unfold. Simply, it is our duty as believers to study the Bible and walk according to the evidence He has given us in His Word. Jerusalem is of primary importance to the LORD, and the day will come when He will fight to redeem her back to Himself and establish His Kingdom. Let us continue to pray for the peace of Jerusalem, pray for her unity, but most of all, let us pray that God will bring His will on this earth in His timing and that we can be found faithful to stand for His truth, despite the world coming against us.