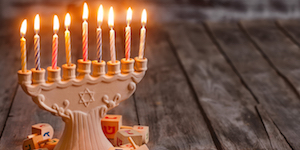 “Now, on the fifteenth day of the month Kislev… they (the Greek occupiers of Israel) set up the abomination of desolation upon the altar (of the temple in Jerusalem)… The Books of the Law which they found, they tore into pieces and burned. Wherever a book of the covenant was found in anyone’s possession, or if anyone respected the Law, the decree of the king imposed the sentence of death upon him. Month after month, they dealt brutally with every Israelite who was found in the cities… In accordance with the decree, they put to death the women who had circumcised their children, hanging the newborn babies around their necks; and they also put to death their families as well as those who had circumcised them…” 1 Maccabees 1:54–61

These words do well to show just how dark was the darkness that Israel faced in the days that Hanukkah now commemorates. At the time, there was a feud between two rivaling Greek empires once part of the united Greek empire of Alexander the Great. Israel, previously controlled by the Ptolemaic Greek dynasty in Egypt, was now controlled by the Seleucid dynasty in the north.

The Seleucid king, Antiochus, had his subjects calling him Epiphanes (the visible god). Strangely, Antiochus, went the extra mile to ensure that the people of Israel understood that he and his gods were superior to the God of Israel. He worked out a deal with corrupt high priests in Jerusalem to turn the Temple in Jerusalem into a Greek “gymnasium” in which the people of Israel would be encouraged to learn about Greek gods. Antiochus even had this corrupted priesthood offering pigs as sacrifices on the altar.

In many ways, the book of Daniel prophecies about this dark time in Israel. True, Daniel also serves to help us understand the “end times”, but the historical events remembered by Hanukkah offer us a clear example of just how dark things may get before the light of God casts away all the darkness of this world once and for all. In Daniel 11:31, we read:

“Forces from him will arise, desecrate the sanctuary fortress, and do away with the regular sacrifice. And they will set up the abomination of desolation.”

So it was in the time commemorated by Hanukkah. The Temple was desecrated by an “abomination of desolation” and the daily sacrifices were stopped for about 3 and a half years by a wicked ruler calling himself “the visible god”.

Yeshua, however, emphasizes (in Matthew 24:15, Mark 13:14, and Luke 21:20) that as foretold in the book of Daniel, there will be an abomination of desolation in the holy place. And so we may be sure as believers that Hanukkah is not only a celebration of a historical miraculous triumph over evil but also an example of a coming miraculous triumph as well.

God has been gracious enough to fill the earth with many who love Him and look to him for guidance. As in the days of Antiochus, there is yet to come a time of great deception and distortion, but God has promised us that such a day would come so that we might not be surprised when it does.

The good news is that God has been faithful to deliver the people of Israel and all who worship the God of Israel time and time again. As Yeshua encouraged his disciples on the night on which He was betrayed, let us watch and pray so that we don’t fall into temptation. A great darkness is coming, but so too is great light. Look to the light, and be of good cheer as the time of our Messiah’s return draws near.

Check out these other great articles from Hope for Israel explaining and celebrating the Hanukkah season: