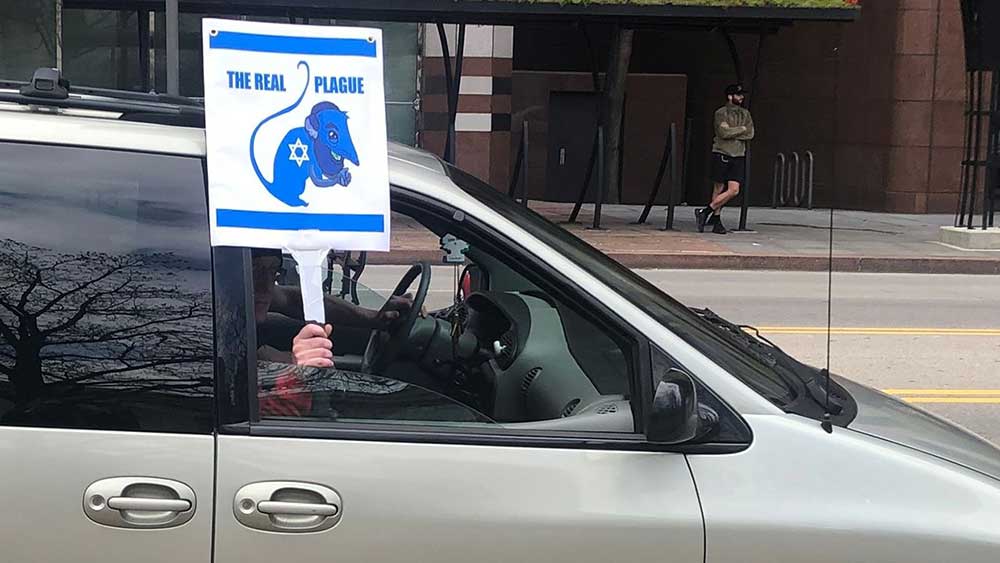 Pictured above: Someone being dropped off by his mom at an anti-Semitic rally in Ohio in the U.S.

It may come as no surprise that with a bunch of people stuck at home and relying heavily on the internet for information during this pandemic, online anti-Semitism is at its worst and anti-Semitic rallies have showed that even in times of crisis, the crisis becomes a new excuse for anti-Semitism. A number of Synagogues holding online gatherings have reported hackers attacking them with threats and anti-Semitic accusations. Racism comes in many forms. Jews aren’t the only targets of racism, but the Jews do get special attention from a number of different groups of racists.

There are a couple anti-Semitic claims right now in connection with the pandemic that we, who know the truth about Israel and the Jewish people, should be quick to boldly dispel whenever it is in our power to do so. Some views being promulgated online right now claim that the Jews are the cause of the pandemic or that they are making the world believe in a pandemic that doesn’t even exist. Others have even gone so far as to not only deny that there is actually a pandemic but to claim that the only real pandemic is the Jewish people.

Although many countries in the west boast of combatting racism in general, and some even boast of fighting anti-Semitism specifically, the reality is that many of these anti-Semitic views and attacks are largely underreported and receive insufficient response leading many Jews to end up in uncomfortable and sometimes very dangerous situations with anti-Semitic groups that are not only allowed to spread their hate but also may carry out attacks before authorities will do anything about them.

Many Jews immigrating to Israel from Europe have indicated that rising anti-Semitism in Europe and the poor response of governments is the reason for moving. And yet, living in Israel comes with its own risks… there are terrorist groups on literally all sides of Israel seeking its destruction. Were it not for the grace of God, Israel would have been wiped out hours after the declaration of independence in 1948 and numerous times since then.

One especially surprising finding as we face the new normal in light of the pandemic is that among social networks, Facebook (whose founder is himself Jewish) has seen the greatest occurrence of anti-Semitic posts blaming Jews for the pandemic. Facebook typically does a better job of censorship than social networks such as Twitter for instance (which typically sees among the highest number of hate speech posts of any major social network with some 58% of anti-Semitic posts on social media typically originating on Twitter).

As we face the new normal and increased uncertainty during these strange times, let us not lose sight of the truth. Let us be a light in dark places and as we encounter the nastiness that is anti-Semitism, may we speak up. Let those who stand on the walls of Jerusalem and those who stand with Israel and the God of Israel not be silent when the lies of the enemy are being spread around us. God bless you and all of us with the strength and the boldness to be bearers of light no matter what the new normal may be.