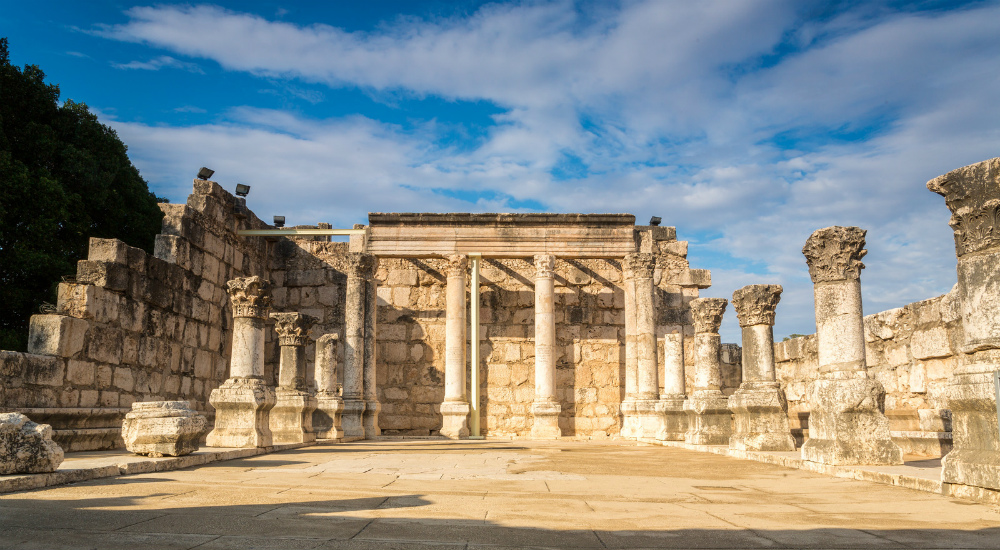 Pictured above: a 3rd century synagogue in ancient Capernaum

Ever since I can remember, I’ve enjoyed learning about words and their origins. From my earliest memories, I can remember going home from school and faithfully reviewing vocabulary lists over and over until I could recognize, define, and spell each word with utmost ease. It should come as no surprise, then, that I’ve especially connected with those messages in church that include some explanation of where words originate. One such message that I once heard was on the word “church”.

I remember hearing a pastor explain that the word “church” in English Bibles was a translation of the Greek word ekklesía (ek-lay-see-ya). A quick look in a Greek lexicon of New Testament words such as Thayer’s Greek Lexicon will typically explain that the word “ekklesía” literally means: called out or forth.

As it turns out, however, most linguistic historians (known as etymologists) suspect that the word “church” came into English from the Greek word “kuriakós” (koo-ree-ah-kos, meaning “the Lord’s”). The word kuriakós was often used in the early Byzantine church to refer to “the Lord’s (kuriakós) house”.

One of our earliest English translations of the Bible was completed by William Tynsdale. He finished translating the New Testament by about 1526, fully 78 years before the Authorized King James Version came into existence. Tynsdale translated the word “ekklesía” quite reasonably as “congregation” (rather than “church”). For some unknown reason, the majority of English translations preferred “church” as the translation of choice for the word ekklesía. One can only hope that the word “church” really did have a similar meaning in early English to that of the word “ekklesía”.

The question remains, however: how did believers in Yeshua some 2,000 years ago view the word “ekklesía”? It’s fine to look in a lexicon and find a literal translation that reads “called out or forth”, but that’s no different than saying that the English word “church” literally means “the Lord’s”. You can even gather from context that the word “church” in English translations of the New Testament is used to refer to a gathering of believers, not to the building in which they gather. However, there is more to the word “ekklesía” than meets the eye — something dictionaries are unlikely to mention.

Did you know that the Jews of Yeshua’s day used the word “ekklesía” interchangeably with the word “synagogue” to refer to the Hebrew concept of “kahál” (kuh-hall, meaning “gathering”)? The Hebrew word kahál is typically used in the ancient Hebrew texts of the Bible to refer to the people of Israel as a collective group. To see how early Greek translations of the Hebrew Scriptures used the Greek words “synagogue” and “ekklesía” for the Hebrew word “kahál”, see below:

… the assembly (synagogue [Greek], kahál [Hebrew]) shall offer a bull of the herd for a sin offering and bring it before the tent of meeting
(Leviticus 4:14)

The Lord gave me the two tablets of stone written by the finger of God; and on them were all the words which the Lord had spoken with you at the mountain from the midst of the fire on the day of the assembly (ekklesía [Greek], kahál [Hebrew]).
(Deuteronomy 9:10)

I was almost in utter ruin in the midst of the assembly (ekklesía) and congregation (synagogue).
(Proverbs 5:14)

By the time of Yeshua’s earthly ministry, nearly 2,000 years ago, the event of gathering as a “synagogue” was described by Jews as an “ekklesía”. It should come as no surprise, then, that Yeshua went around teaching in synagogues and referring to the gathering of his followers as his “ekklesía”. It’s also not surprising that Yeshua, as the head of an “ekklesía”, was referred to as a rabbi.

Was Yeshua’s ekklesía merely to be a group of “called out ones” with no reference to Jewish perceptions of the word ekklesía at the time when the New Testament was written? Or was the term “ekklesía” rather used intentionally in a Jewish context that understood it as a gathering of the synagogue of Israel (what was referred to in Hebrew as the “kahál”)? Does referring to the gentile believers with the term “ekklesía” negate the typically Jewish use of this term in connection with synagogue communities? How much should the “church” look like the synagogue? The answers to these questions are likely best understood by spending time in prayer and in meditation on the Word of God.

[sc_embed_player fileurl=”https://hope4israel.org/wp-content/uploads/2018/02/kuriakos.mp3″] kuriakós (Greek) — of or belonging to a master (origin of the word “church”)