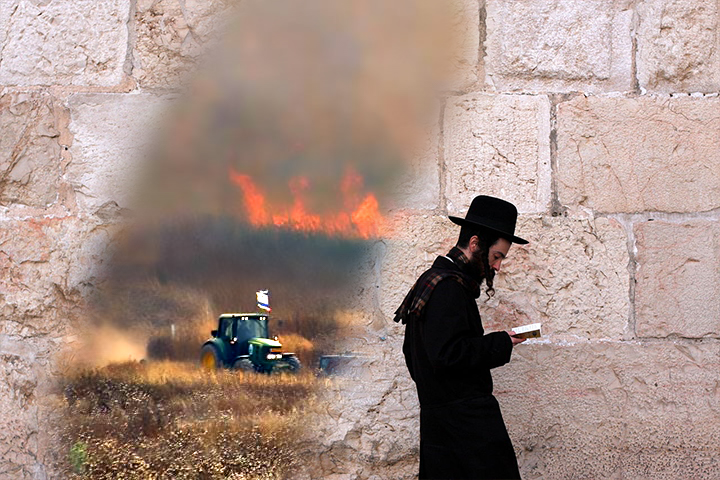 Growing up, I knew almost nothing about Israel or the Jews. I grew up Christian, but to me, Israel was not a place or a people that I knew anything about. I read the stories of Israel in the Bible as examples of right and wrong ways for members of the church to interact with God.

Perhaps Israel became a symbol to me of the church because growing up Christian, the concept of “the church” was a big part of my faith and yet the concept of “the church” is hardly mentioned in Scripture (barely more than 100 times and only in the New Testament). Israel, on the other hand, is mentioned nearly 2,400 times throughout the Scriptures. Growing up, I looked to those nearly 2,400 mentions of Israel as a model of how the church should or should not be. I never even thought of the modern day nation of Israel or the Jewish people in our time.

At this point in my life, I realize that most, if not all, of those nearly 2,400 times that Israel is mentioned, Israel refers to a specific people descended from Abraham, Isaac and Jacob and a specific region that God promised to their descendants. Should we look to Israel as an example of how we should or should not relate to God as “the church”? Definitely! But that doesn’t mean that the physical place and people called Israel has been reduced to a metaphor for the church.

About 6 years ago, I began my personal journey of learning about the actual place and people called “Israel”. Just 5 years ago, that journey involved moving to Israel, learning Hebrew and studying the Scriptures alongside Israelis, both in academic settings and in more informal social settings. I felt like I was home the moment I landed here. I quickly made friends from a variety of ethnic backgrounds: Jewish, Palestinian, and others.

I truly found it easy to grow in an understanding of Israel by getting to know real people who live here in the Land. Visiting the biblical sites has also been incredibly helpful in grasping what I’m reading in Scripture. I’ve come to know the struggles of Jews and Arabs alike here in the land and understand more than ever the importance of praying for God to be made known in this land and from this land.

As I’ve grown in an understanding of Israel by getting to know Israelis, both Jewish and Arab, I’ve also come to realize just how limited the information on the internet and in the news truly is, and how most of the information presented in the media distorts the truth about this land and the people in it. I’ve even had the opportunity to see the behind the scenes realities when anti-Israel news organizations stage filming opportunities that make Israel look bad. This is such a sad thing to see. Sadder yet is when Christians buy into their lies and take on offence towards Israel based on distorted half-truths.

I’ve seen some pretty bitter accusations from Christians (many of whom have never even been here), some calling “Israel” wicked (a HUGE generalization). I’ve also seen Christians who support Israel saying things like “curse the Palestinians”. Accusations against Israel and cursing the Palestinians seem to me entirely lacking the heart of Messiah. All of these hurtful generalizations of the situation here only serve to further incite and justify distrust and even disgust based primarily on distorted and limited information.

In the past few years of my life, I’ve come to understand just how important it is to grow in our understanding of Israel as believers and to pray for peace in this land. As we learn about Israel, however, we must remember to love one another by refusing to stand as judge and jury over Israel—especially those of us who weren’t born and raised here, and even more so if you’ve never even visited.

Listen to people from all backgrounds, but even then, DON’T take on their offences towards those who have hurt them. Offence often leads to sweeping generalizations that aren’t fair and that only encourage further mistrust and further offence. The best thing we can do for our brothers and sisters here in the Land is to listen and to say YES and AMEN to those things that are good, those things that are in line with the Word of God, those things that flow from the heart of God and not from a spirit of offence.

I want to encourage you to get to know the real Israel by checking out our “Beyond the Headlines” videos (click here). We also have a large selection of articles that we’ve written on this and similar topics on our website (click here). Look up the word Israel in the Bible and do a topical Bible study on Israel. Engage in dialogue with the people who live in Israel and have real life experience with the situation. If you have specific questions for specific groups of people, connect with those people any way you know how.

If you like, message us privately on Facebook and let us know your questions about the situation here. If we don’t have answers, we likely know someone who will. We are in close relationship with people of numerous ethnic backgrounds here in Israel and in different locations across the land, and we are happy to be a resource for you!